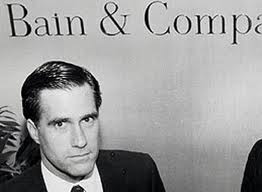 One of Bain's takeover targets while Gov. Romney ran the predator investment firm, was Princeton Review, one of the largest testing and test-prep operations in the country. In 2007, Bain and Prides Capital, made a $60 million  preferred stock investment in Princeton and effectively took the company over, replacing former CEO John Katzman with Michael J. Perik, former CEO of The Learning Company (another Bain company).

Said Perik, at the time, "I am also pleased to be able to work again with Bain Capital. First at The Learning Company, then at Houghton Mifflin, and now at The Princeton Review, I have been impressed by the firm's ability to identify market leaders and its skill at building lasting value for all the stakeholders."

As an inducement to hiring Perik as CEO, the company granted him a stock option to purchase 1.7 million shares of the company's common stock having an exercise price of $4.69 per share. How nice for him.

Posted by Mike Klonsky at 3:50 AM No comments:

The world's poor are not begging for charity from the rich, writes the Guardian's Robert Newman, – they're asking for justice and fairness.

As the world's one-percenters gather for this year's World Economic Forum in Davos, Switzerland, they can feel the presence of 99ers camped outside their doors over at Camp Igloo. As usual, the most powerful of the power philanthropists will be there, led by the "designated voice of the world's poor", Bill Gates.


Am I saying that philanthropy has never done good? No, it has achieved many wonderful things. Would I rather people didn't have polio vaccines than get them from a plutocrat? No, give them the vaccines. But beware the havoc that power without oversight and democratic control can wreak.

But the point is that the poor are not begging us for charity, they are demanding justice. And when, on the occasion of his birthday, a sultan or emperor reprieved one thousand prisoners sentenced to death, no one ever called those pardons justice. Nor is it justice when a plutocrat decides to reprieve untold thousands from malaria. Human beings should not have to depend upon a rich man's whim for the right to life.

Posted by Mike Klonsky at 3:28 AM No comments:

The main problem, among many, is that school systems cannot function as free markets if we want to achieve universal post-secondary readiness. Free markets produce efficiency, not equity for all. Efficiency helps maximize profit, but what about students that aren’t profitable to educate?

Download full report (pdf)
View online at Scribd
Posted by Mike Klonsky at 4:48 AM No comments: 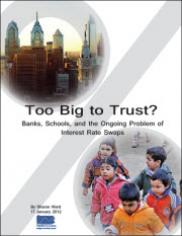 Philadelphia, like many cities, has faced serious financial difficulties in recent years. These difficulties have forced the city government to make ends meet by cutting agency budgets, cutting services and raising taxes. The city trimmed almost $100 million off its budget during 2008 and 2009, and the school district faced a $629 million budget hole just this year, which was closed by laying off teachers and cutting programs for students.

The Pennsylvania Budget and Policy Center, points to highly-speculative, risky interest-rate swap deals the city negotiated with banks such as Wells Fargo, Morgan Stanley and Goldman Sachs that have cost the city and school district $331 million in net interest payments and cancellation fees, according to the report, "Too Big to Trust? Banks, Schools and the Ongoing Problem of Interest Rate Swaps.” If interest rates continue to remain low, still-active swaps could cost the city another $240 million in future net interest payments.

According to the report:

These financial institutions have profited, while Philadelphians have paid the price through lost city services, lost jobs, and lost school programs. The financial institutions, on the other hand, have returned to profitability with subsidies from taxpayers—including Philadelphia taxpayers—and with multimillion-dollar contracts with the city. Moving forward the banks should respond as good corporate citizens of Philadelphia, by refunding a portion of the lucrative cancellation fees they received for terminating bad deals and renegotiate those deals which are currently active.

"Good corporate citizens," indeed.
Posted by Mike Klonsky at 7:50 AM No comments:

Ken Griffin and wife Anne, have become two of the most prominent and powerful names associated with Chicago's corporate-style school reform. As the founder and head of the Chicago-based hedge fund Citadel, Griffin is reported to be worth $2.3 billion, making him the fifth-richest Chicagoan and 159th-richest American, according to the 2010 Forbes 400.

He and his wife, Anne Dias Griffin, have been major players in the world of political money: Campaign finance records show that the Griffins have donated more than $3 million to candidates and political action committees—including $450,000 last fall to Republican Bill Brady in the tight 2010 Illinois governor’s race.

The Griffins, along with other Chicago billionaires like Penny Pritzker and Bruce Rauner, also helped underwrite the anti-union lobbying group Stand For Children, headed by Jonah Edelman.  In 2010, Ken gave $500,000 each to two different political action committees—on October 25th to American Crossroads, an organization, according to its website, “dedicated to renewing America’s commitment to individual liberty, limited government, [and] free enterprise” and on December 15th to Stand for Children Illinois.

Noted art aficionados, they own works by Monet, Degas, and Cezanne, and paid $80 million for a Jasper Johns painting reportedly worth $2.3 billion, Ken bundled money for both Obama and John McCain during the 2008 election. In the 2012 election cycle, the couple has given $500,000 to the Republican Governors Association, $300,000 to Rove's American Crossroads, and $150,000 to the Wisconsin Club for Growth. Bonus: Charles Koch named them as part of alist of elite donors who have pledged $1 million to his and his brother David's conservative fundraising machine.

Posted by Mike Klonsky at 12:17 PM No comments:

Vouchers are the life-line for the Catholic schools

One of Republican lawmakers’ strongest allies in the fight for vouchers is the Catholic Church. With an exodus of parishioners to the suburbs and the rise of tuition-free charter schools, Catholic school enrollment has plunged 60% from its peak of 5.2 million in the early 1960s. Catholic educators view vouchers as a way to slow a resulting tsunami of school closures. Their lobbying helped convince Boehner, a product of Cincinnati Catholic schools, to revive the D.C. voucher program. -- Thomas Toch, "Vouchers Redux"

Posted by Mike Klonsky at 6:32 AM No comments:

Email ThisBlogThis!Share to TwitterShare to FacebookShare to Pinterest
Labels: vouchers

Anna Scholl, joins Thom Hartmann in exposing ALEC - the American Legislative Exchange Council. In case you don't know what ALEC is - it's a far-rightwing organization that brings together corporate CEOs and lobbyists with elected lawmakers to come up with custom-made legislation that benefits anti-public school  "reformers", big polluters, job out-sourcers, and banksters, and hurts unions, poor people, and voters. And apparently it's found a friend in Virginia. Gov. McDonnell and the VA General Assembly, where since 2007, over 50 different pieces of legislation have been introduced that are exact carbon copies of ALEC written legislation.

ALEC has apparently found another friend in power philanthropist Bill Gates whose foundation  recently bestowed a $376,635 grant upon this right-wing political action and lobbying group.
Posted by Mike Klonsky at 7:51 AM No comments:

One of the few good things that came out of last night's Republican debate was the further exposure of Mitt Romney as founder of the notorious Bain Capital investment firm. In his 2010 book The Buyout of America: How Private Equity Is Destroying Jobs and Killing the American Economy, Josh Kosman described Bain Capital as "notorious for its failure to plow profits back into its businesses."

But what wasn't mentioned was Bain's connection to the world of corporate-style school reform and privately-managed charter schools -- namely KIPP.  Among those I listed in my post, on the corporate muscle behind KIPP, back in April, was Bain's managing director, Mark Nunnely.
Nunnely is director of the KIPP Foundation. He also directs New Profit, Inc, a group of "social entrepreneurs" dominated by Bain execs like Josh Blankenstein and Paul Edgerley.
According to Forbes,

New Profit investors get scorecards on all organizations once every quarter. They're usually familiar with them already but, at a glance, they can tell if their money is being put to good use. Poor performers are washed out by well-run operations.

New Profit also operates the Pathways Fund. These two groups are part of a larger network of "investors" who provide millions in funding to private operators of charter schools as well as to Michelle Rhee's Children First, Stand for Children, Teach For America and other corporate "school reformers."
Vanessa Kirsch is the founder and president of New Profit and Romney served on the board of City Year, a nonprofit co-founded by Kirsch's husband.


The firm Romney once ran, Bain Capital, has deep ties to City Year and the new America Forward coalition. "Our business is backing strong management teams with creative solutions to hard problems," explained Mark Nunnelly, managing director of Bain Capital. "I think a lot of us like the idea that you can take this same approach and apply it to not-for-profits." -- AP Wire, December 10, 2007

Posted by Mike Klonsky at 7:42 AM No comments:

The number of students in virtual schools run by educational management organizations rose sharply last year, but the students in those schools are lagging far behind their peers in in traditional public schools. This according to a new study by the National Education Policy Center.
About 27 percent of these schools achieved “adequate yearly progress,” the key federal standard set forth under the No Child Left Behind act to measure academic progress. By comparison, nearly 52 percent of all privately managed brick-and-mortar schools reached that goal, a figure comparable to all public schools nationally.


“There’s a pretty large gap between virtual and brick-and-mortar,” said Gary Miron, a professor of evaluation, measurement and research at Western Michigan University and a co-author of the study.

Nonprofit E.M.O.’s have a better track record of academic success than for-profits, and smaller E.M.O.’s in general perform better than larger ones, at least defined by the federal standard of adequate yearly progress — a metric Dr. Miron called “very crude.”
Posted by Mike Klonsky at 4:43 AM No comments:

A look back at Duncan's Race To The Top

U.S. Secretary of Education Arne Duncan said today that he plans to demand radical steps—such as firing most of a school’s staff or its conversion to a charter school—as the price of admission in directing $3.5 billion in new school improvement aid to the nation’s 5,000 worst-performing schools. (EDWEEK)

Posted by Mike Klonsky at 3:57 AM No comments:

How Pearson wins their testing contracts


Michael Winerip, writing in the Jan. 1 New York Times ( "New Questions About Trips Sponsored by Education Publisher") reveals the secrets behind Pearson's success in cornering the market on standardized testing.

Here's how they do it in Kentucky:


In April, Kentucky’s Education Department approved a $57 million contract with Pearson. And then, over the next six months, the commissioner who oversees that department, Terry Holliday, traveled to both China and Brazil on trips underwritten by — that’s right — the Pearson Foundation.


Christopher Koch, state superintendent of education in Illinois — which has $138 million in contracts with Pearson — went to China, Brazil and Finland with the foundation. The only Pearson compensation he listed on state ethics forms was the cost of the flight to China, $4,271 for business class. Asked why hotels, meals and the other flights were not documented, a spokesman for Dr. Koch, Matt Vanover, said, “What we’re looking at is a litmus test; they just want to make sure he’s not traveling first class.”

And so it goes.
Posted by Mike Klonsky at 7:01 AM No comments: