The recent pro-charter school rally in Hartford was organized by ConnCAN and Families for Excellent Schools — two of the top lobbying spenders this year. Tax filings and donor reports reveal that both groups receive funding from people who spent on Connecticut Democratic campaigns in the past election cycle. Also, Democrats for Education Reform, a pro-charter school political action committee primarily funded by hedge fund managers contributed heavily to the campaigns.

Gov. Malloy’s insistence on increasing funding for charter schools has more than a dozen Democratic legislators questioning whether they can support the next state budget if it means their neighborhood public schools are flat-funded or cut.

Malloy's campaign is already under state investigation for misuse of campaign funds. The State Elections Enforcement Commission has issued subpoenas to the Democratic State Central Committee as it investigates the committee using money from a federal fund to pay for a mailer benefiting Gov. Dannel Malloy’s re-election race.

Wall Street billionaires who have invested heavily in the expansion of charter schools contributed more than $200,000 to Democrats in the 2013-14 election cycle, helping Gov. Dannel P. Malloy secure re-election.

The campaign contributors earned their fortunes as hedge fund managers and private equity investors before earning reputations as "education philanthropists." They have helped bankroll charter school movements throughout the country, spending to influence elections and to support advocacy movements.

The campaign contributions last cycle came from board members at and top donors to pro-charter school groups such as the Connecticut Coalition for Achievement Now (ConnCAN), Achievement First, Families for Excellent Schools and others that have spent nearly $800,000 lobbying the legislature this year.

•Jonathan Sackler, an investment manager from Greenwich, the founding chairman of ConnCAN, and an Achievement First Inc. board member. Sackler, his wife, and his mother and father gave a combined $91,000 to state Democrats last cycle in contributions to various party and political action committees.

•Greenwich hedge fund manager Stephen Mandel, the founder of Lone Pine Capital, and his wife gave a combined $40,000 to the state Democrats' federal account in the past election cycle. Mandel, a Teach for America board member, is a top donor to local and national charter school advocacy groups through his Lone Pine Foundation. The Lone Pine Foundation funds three public policy fellowships in Malloy's office; it also has awarded grants to Families for Excellent Schools.

•Alexandra Cohen gave $20,000 to state Democrats in the past cycle. Cohen is the wife of embattled hedge fund manager Steve Cohen, whose SAC Capital paid $1.2 billion in a security fraud case last year. The couple's Steven and Alexandra Cohen Foundation is a top donor to ConnCAN.

•Arthur Reimers, a former Goldman Sachs partner who is on the ConnCAN board of directors, gave $20,000 to the state Democrats' federal account.

•Petra Real Estate CEO Andrew Stone, a board member at the Success Academy, a New York-based charter school management company, gave $10,000. The Success Academy has worked closely with Families for Excellent Schools; it closed all of its schools in New York earlier this year to bus students and parents to a rally.

Connecticut is not the only target of these lobbying efforts: Some of the same donors contributed to New York Gov. Andrew Cuomo's campaign prior to a record-expensive charter school lobbying push they helped fund in that state.
Posted by Mike Klonsky at 4:51 AM No comments:

"We've sunk to a level where there is no viable discourse and no moral conscience when it comes to public education and control of the school board." -- LAUSD board member Steve Zimmer

It's happened again. A PAC of billionaire charter patrons spent millions and virtually bought a school board election. This time in L.A. According to the L.A. Times,

The victory of charter school co-founder Ref Rodriguez over progressive Bennett Kayser, gave charter privateers the seat they needed to open up the district to what they hope will be unfettered charter expansion. Rodriquez also had the backing of anti-union groups like Michelle Rhee's StudentsFirst. His endorsement list includes the operators of charters that L.A. Unified tried to close because of low test scores and other problems. The charters appealed to other agencies and were able to remain open. No district in the nation has more charters, or more students enrolled in them, than L.A.

But despite spending millions on L.A. board campaign, they fell short of a clean sweep. In the west San Fernando Valley, incumbent Tamar Galatzan, who had been a close ally of disgraced former Supt. John Deasy and had the support of charter advocates and other well-funded groups, lost to challenger Scott Schmerelson, an ally of the teachers union.

Posted by Mike Klonsky at 4:59 AM No comments:

In L.A., Deasy gone but leaves in his wake, feds, grand juries, and litigation 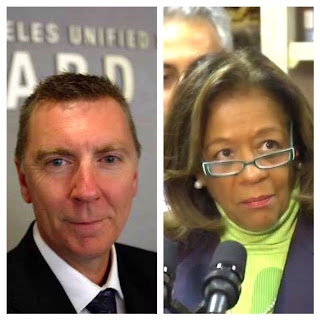 This is getting to sound repetitive. Post-Deasy L.A. is sounding a lot like post-Byrd-Bennett Chicago.

Former LAUSD Supt. John Deasy is gone. They've provided a soft landing for him at the Broad Leadership Academy. That's where school superintendents like Barbara Byrd-Bennett learned how to dole out no-bid contracts to companies like SUPES and Pearson. It's also where public education and democracy go to die.

But look at Deasy left behind when he got out of Dodge.


Today, LAUSD is exploring possible litigation against Apple and Pearson, the world’s largest education publishing company, to recoup millions of dollars; a criminal grand jury is investigating possible ethics violations by district officials; the Federal Bureau of Investigation and the Securities and Exchange Commission have launched their own inquiries into possible wrong-doing; and Deasy resigned...

...The SEC in April also launched an inquiry into whether L.A. school officials complied with legal guidelines in the use of bond funds to finance the iPad deal. Using construction bonds to purchase Internet infrastructure is common, but the LAUSD also used money from the bonds to purchase the iPads, which break down after a few years. Some critics of the plan have said LAUSD should have set aside a sum from its operating budget to purchase the tablets...

...Meanwhile, LAUSD took action of its own in April, announcing it would seek to recoup millions of dollars from Apple because it was “dissatisfied with their product.” The district’s demands for a refund stem from materials that didn't adapt well for students who weren't proficient in English and a lack of software tools to analyze how well the curriculum functions.

How many more urban districts will be stuck with the tab of corporate reform after the Broad superintendents flee the scene?

Posted by Mike Klonsky at 1:12 PM No comments: