Moody's -- Charters are expanding at the expense of public schools

A new Moody's report finds that charter schools have expanded at the expense of urban public schools, especially on those districts confronted with a shrinking tax base and government funding cuts.


Municipal finance analysts at Moody’s recently took a look at the impact of charter school growth on public finances, finding “while the vast majority of traditional public districts are managing through the rise of charter schools without a negative credit impact, a small but growing number face financial stress due to the movement of students to charters.”

The report found that cutting costs to match declines in funding can be difficult, as decisions to close schools—even if they are half-empty—can result in fierce political fights. And decisions to cut academic programs can actually exacerbate funding problems further by spurring still more students to leave for charter schools.

You can read more about the Moody's study in the latest issue of The Atlantic.

Posted by Mike Klonsky at 3:46 AM No comments:

A report in the L.A. Times shows that Broad posed as a liberal supporter of Gov. Brown's tax initiative to support public education by making the wealthy pay their fair share. All the while, Broad was secretly pouring more than a million dollars into the right-wing, anti-union fund set up to oppose that same initiative.

According to the N.Y. Times, AJS is nothing more than a conservative Republican Party front, run by former Bush political director, David Carney, with ties to Rove, Bachmann, and  Boehner.

Diane Ravitch blogs that she spoke in Sacramento two years ago, she spent two hours with Governor Brown and he told her he had to be diplomatic and nice to Michelle Rhee to keep Eli Broad’s support for his tax increase. "He was fooled" says Ravitch.

Posted by Mike Klonsky at 10:18 AM No comments: The market for testing products and services is booming and could continue to surge over the next few years, according to industry analysts and company officials, who say that growth is being fueled by the shift toward common-core tests.

Federal education policy since No Child Left Behind has fueled the testing boom which in turn has driven even more testing down to lower and lower grades. Many states and districts have approved policies tying teachers’ and administrators’ evaluations to students’ academic progress, as measured in part by state tests—policies supported by the Obama administration through its Race to the Top program.

In an article sponsored by the Gates Foundation, Edweek's Sean Sean Cavanagh writes:


Changes in testing policy with nationwide implications are invariably “good for any provider of testing materials,” said Scott Marion, the associate director of the National Center for the Improvement of Educational Assessment, a Dover, N.H.-based nonprofit organization that consults with states on assessments. “You knew the common core was going to be a big change from what [we] had before.”

It is estimated that the current market for technology-based testing and assessment products and services in fiscal 2011 was $1.6 billion. Preliminary results that are still being analyzed show the market grew by at least 20 percent for fiscal 2012. The biggest player in the testing market is London based Pearson Publishing which has close ties to the Obama administration and Ed Secretary Arne Duncan. 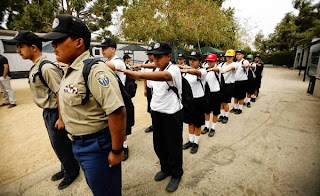 The bugler lifts the brass instrument to his mouth and waits. A short delay betrays the illusion, but then a recording of "Reveille" blares out from stereo speakers as the flag moves up the pole.

That's how the day starts at North Valley Military Institute, a Los Angeles Unified School District charter school that this year transformed from a traditional campus into a military-style boot camp for mainly low-income, Latino children. 25% are classified as special ed.


Each morning, four students — one representing each company: Alpha, Bravo, Charlie and Delta — stand watch over the front entrance of the school. They eye the students, searching for flaws in uniforms, for closely cropped hair on the boys and tightly pinned-back hair on the girls. Colored nail polish is prohibited, but makeup is allowed in moderation. Any infraction constitutes a demerit, and each demerit lands a student 15 minutes of detention, which the school calls a "reboot." -- L.A. Times

As for Common Core, students are taught military courtesies — the use of "sir" and "ma'am" when addressing their elders, for instance — operate under a rank structure and wear uniforms. Students lead platoons of their peers, do physical training twice a week and follow a demerit system. According to the Times,


The military influence has led to some confusion in the surrounding neighborhood. Some parents believe the school is a boot camp for troubled teens or is run by the military.

They're right. The military curriculum is overseen by the California Cadet Corps, the youth program of the California National Guard.
Posted by Mike Klonsky at 4:28 AM 1 comment:

Schools are broke but Rahm rolling in election campaign dough 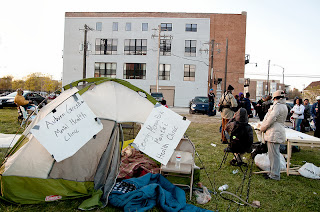 While he was busy closing public schools, shuttering public health clinics, and reaming the teachers pension fun, Rahm still found time to raise another $1.1 million last month for his election war chest. He hopes to be able to exceed the $14 million he used to buy the election the last time around.

You won't be surprised to learn that the mayor got a $10,000 gift from the group, Stand For Children, which has been promoting anti-union policies nationwide and in Chicago.


Some folks who have obvious issues of importance pending at City Hall also were big donors. Like United Center owner Jerry Reinsdorf, who gave near the maximum $5,300 gift and has been waiting for Mr. Emanuel to sign off on a renewed tax break for the stadium and a proposed shopping complex near it. Or Todd Ricketts, co-owner of the Chicago Cubs, who gave $2,500 and whose family stands to gain from a plan to rebuild Wrigley Field that was pushed through the City Council by Mr. Emanuel. Then there was $3,000 from Arlington Park race track, which would be hurt by Mr. Emanuel's proposal for a downtown casino but perhaps just wants to stay on speaking terms.

Hinz adds that the bulk of Rahm's money is coming from a national network of donors put together by Mr. Emanuel on behalf of Presidents Barack Obama and Bill Clinton, with the aid of Mr. Emanuel's Hollywood agent brother, Ari Emanuel.

With all that money, can Rahm be beat? I think so.

Posted by Mike Klonsky at 3:56 PM No comments:

Mother Jones overturns a rock and shines a light on neo-con "vulture-fund billionaire" Paul Singer, who has become congressional Republicans' most powerful fundraiser. He's been described as a "fundraising terrorist" for his persistence in twisting arms, a skill that has helped drive a major strategic shift among Big Finance donors, who favored Obama in 2008 but now overwhelmingly back the GOP. Recently, Singer has given sizable sums to the billionaire Koch brothers' dark-money projects as well as to the Club for Growth, an anti-tax group that has helped tea partiers oust several mainstream Republicans.

Investigative Journalist Greg Palast uncovered debt manipulation by Singer, who he deems "Vulture Singer." Palast writes that Singer's "modus operandi" is to find some forgotten tiny debt owed by a very poor nation (Peru and Congo are given as examples). Singer then waits for the US and European taxpayers to forgive the poor nations' debts; as well as offers of food aid, medicine and investment loans. At this point Singer grabs at every resource and all the money going to the desperate country. Palast writes that trade stops, funds freeze and an entire economy is effectively held hostage. Singer then demands aid-giving nations pay monstrous ransoms to let trade resume. Singer demanded $400 million dollars from the Congo for a debt he picked up for less than $10 million. Palast writes that if Singer doesn't get his 4,000% profit, he can effectively starve the nation. In Congo-Brazzaville last year, one-fourth of all deaths of children under five were caused by malnutrition. -- Source Watch

But not mentioned in the MJ piece or by Palast, is Singer's backing of public school privatization schemes, union busting, and privately-operated charter schools, including Eva Moskowitz' Success Academy Charter Network. Singer is also on the board of the right-wing Manhattan Institute which works to undermine and privatize public education. He was one of the big backers of Jeb Bush's, Excellence in Action National Summit on Education Reform, which featured the likes of corporate school "reformers" like Joel Klein, John Podesta, Condoleeza Rice, and Arne Duncan.

In April, the AFT included included Singer and three other billionaires on its “watch list” of money managers that support groups hostile to traditional public pensions. The groups include Michelle Rhee's StudentsFirst. --Bloomberg

Posted by Mike Klonsky at 7:29 AM No comments: 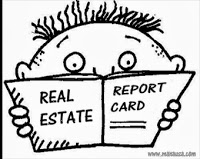 Current testing policies which rank schools on the basis of student test scores, contribute to a two-tier school system, including the racial re-segregation of schools, housing, and a widening of the gap between rich a poor. All these factors come together in a real estate market where home buyers pay a big premium to live near top-ranked schools.


How much more do they have to pay for a home that feeds into a top-ranked elementary school as opposed to an average-ranked school? Nationally, try an extra $50 per square foot, on average, according to the data crunchers at Redfin.

The findings are a jolt of reality for almost 1,000 consumers who plan to buy a home in the next two years and completed a Realtor.com survey in July. More than half of those potential buyers said they'd be willing to pay as much as 20 percent above their budget to buy a home within certain school boundaries. Apparently, that's not enough to get into the best schools.

Information on schools and test scores came from Onboard Informatics, Maponics LLC and GreatSchools, a national nonprofit. Its assessment of 2012 top-ranked elementary schools was based on test scores.

The high-stakes nature of standardized testing becomes even greater when scores are tied to the value of family homes. But according to the Baltimore Sun,


Agents say they're hesitant to talk about schools to clients for fear of running afoul of the federal fair-housing law, which bans steering based on such factors as race and gender. That increases buyers' reliance on test scores, because for out-of-towners it's one of the few easily available indicators of school quality.

Joann Barkan has an excellent piece, "Plutocrats at Work: How Big Philanthropy Undermines Democracy", in the Fall Issue of Dissent.


Because they are mostly free to do what they want, mega-foundations threaten democratic governance and civil society (defined as the associational life of people outside the market and independent of the state). When a foundation project fails—when, say, high-yield seeds end up forcing farmers off the land or privately operated charter schools displace and then underperform traditional public schools—the subjects of the experiment suffer, as does the general public. Yet the do-gooders can simply move on to their next project. Without countervailing forces, wealth in capitalist societies already translates into political power; big philanthropy reinforces this tendency.