The myth of Trump's business acumen. He's a fraud. 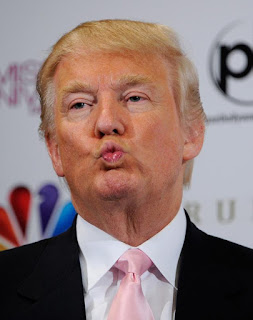 I'm surprised the rest of the media hasn't picked up on this story.

It seems that most everything Donald Trump touches, including his business dealings, turns to shit. Born with a silver spoon in his mouth and worth $200M in 1982, Trump would be four to five times richer today is he had just let his money sit in an account instead of getting personally involved.

This, even taking into account that he has been exaggerating his net worth by 100% since he began his presidential campaign. His self-described net worth jumped from that $200M in 1982 to the $8.7 billion he estimated his net worth to be today. Even if you use the lower Forbes 400 estimate of $4.1 billion, it's still pretty impressive. Right?


If Trump had merely invested that $200 million in the S&P 500 (500 of the largest companies in the US), he would have averaged an 11.86% annual return and ended up with $20 billion. That’s without starting or managing any companies or employing his famed “Art of the Deal.” He wouldn’t even have had to pick the stocks. What this means is that anyone can beat Trump when it comes to making money.

His gigantic business failures and multiple bankruptcies have not only lessened his potential personal wealth but have hurt the overall economy and cost thousands of workers their jobs and livelihood. For example, he's among the high rollers who promised that his casinos would revitalize Atlantic City. Instead, Trump Atlantic City entities have filed four times for corporate bankruptcy, costing hundreds of layoffs and huge losses for his investors. Today, Atlantic City stands as a monument to corporate greed, concentrated poverty and human misery.


Then again, I’m not all that sure that Donald Trump understands the economics of anything much other than real estate development. Which isn’t, when you come to think of it, all that much of a recommendation for someone who would become the chief executive of the nation.

To top it off, Trump brags about how little taxes he pays. Too bad for schools, roads, libraries, and social services. If you haven't read, "The America We Deserve" (I'm not recommending it), here's what Trump thinks of schools


"Schools are crime-ridden and they don’t teach."

You can see why he pays as little taxes as possible.


Now he wants an opportunity to do for the country what he's done to many of his various properties and business partners.

Posted by Mike Klonsky at 2:41 PM No comments:

Amplify in the dumper. Another Joel Klein/Chris Cerf loser.

"A lot of poor quality work passed off as final products, most everything is worked out in production leading to many hot fixes and more long hours. Little respect for teachers or end-users in many within the company.... No, I would not recommend this company to a friend." -- A 2013 Review from a former Wireless Generation employee

What happened to Amplify? It's a bust. School districts who bought in are screwed. Thanks Joel Klein and Chris Cerf.

Rupert Murcoch's News Corp spent nearly $1 billion on its digital education business, In 2010, they paid $360 million for a 90% stake in Wireless Generation, a company based in Brooklyn that specializes in education software, data systems and assessment tools which was supposed to help teachers analyze student performance and customize lessons.

Hundreds of cash-strapped public school districts (including Chicago) were encouraged to fork over hundreds of millions of dollars in no-bid contracts and handed Murdoch's people control of all student records and family information. Amplify, became a top industry seller.

But News Corp. announced today that it would cease actively marketing Amplify’s Access products to new customers. It claims it will continue to provide service and support to its existing customers. But the Company is reviewing strategic alternatives with respect to Amplify’s remaining digital education businesses.

According to The Street:


Known as Amplify, the digital-education unit within Murdoch's News Corp (NWSA - Get Report)  has been hampered by the slow adoption of its mobile device known as the Tablet computer.

The tablet's future was said to be riding on Amplify's ability to sell the device into districts for the 2015-2016 school year. That effort appears to have fallen short of expectations made five years ago after News Corp, with great fanfare, hired former New York City education commissioner Joel Klein and then paid $360 million for a 90% stake in Amplify's predecessor, Wireless Generation.

In May, Amplify Chief of Staff Justin Hamilton hinted that such plans might be in the offing when he said that "we will always be responsive to the marketplace."

You might remember Hamilton as Arne Duncan's former press secretary in charge of selling Duncan's Race To The Top. It seems he didn't do any better hustling Amplify.

Posted by Mike Klonsky at 3:30 PM No comments:

Clout-heavy Eva Moskowitz runs N.Y.'s Success Academy which is already one of the richest charter school networks in the city. Tax documents show the non-profit took in a whopping $34.6 million for the financial year ending June 2013.

Now John Paulson, the infamous scam-artist, hedge-fund billionaire from Queens, is throwing $8.5 million more her way. Moskowitz pays herself more than an half-million a year to run her network of charters.

Paulson's connection with privatization of public schools began with the notorious Boston Consulting Group in 1980. But he made his real fortune during the global financial collapse (which he helped cause, according to these economists), by betting against subprime mortgages using derivatives. His shady deals, including involvement in the Abacus scandal resulted in Goldman Sachs paying a $550 million penalty, the largest ever paid by a Wall Street firm.

This from Deep Capture:


It is not clear which banks ultimately participated in Paulson’s scam, but Fiderer quotes Bear Stearns trader Scott Eichel as saying that his bank refused. “It didn’t pass the ethics standards;” Eichel said, “it was a reputation issue and it didn’t pass our moral compass. We didn’t think we could sell deals that someone was shorting on the other side.” Bear Stearns’ moral compass was usually pointed towards the darker regions, but perhaps this is why Paulson subsequently became one of the more eager short sellers of Bear Stearns’ stock.

Paulson and Moskowitz make a great pair. Don't they?

Posted by Mike Klonsky at 7:32 PM No comments: