So Americans have no idea how much the Masters of the Universe are paid, a finding very much in line with evidence that Americans vastly underestimate the concentration of wealth at the top.

Is this just a reflection of the innumeracy of hoi polloi? No — the supposedly well informed often seem comparably out of touch. Until the Occupy movement turned the “1 percent” into a catchphrase, it was all too common to hear prominent pundits and politicians speak about inequality as if it were mainly about college graduates versus the less educated, or the top fifth of the population versus the bottom 80 percent.

And even the 1 percent is too broad a category; the really big gains have gone to an even tinier elite. For example, recent estimates indicate not only that the wealth of the top percent has surged relative to everyone else — rising from 25 percent of total wealth in 1973 to 40 percent now — but that the great bulk of that rise has taken place among the top 0.1 percent, the richest one-thousandth of Americans.

Posted by Mike Klonsky at 4:22 AM No comments: Links to this post

'The last honeypot for Wall Street'

Venture capitalists and for-profit firms are salivating over the exploding $788.7 billion market in K-12 education, writes Lee Fang at The Nation.


“It’s really the last honeypot for Wall Street,” says Donald Cohen, the executive director of In the Public Interest, a think tank that tracks the privatization of roads, prisons, schools and other parts of the economy.

K12 Inc.’s lobbyists helped author model legislation to develop sweeping voucher laws through the American Legislative Exchange Council, a conservative group that provides state lawmakers with template legislation. Though state by state lobbying figures are difficult to come by, given the patchwork of varying laws, K12 Inc. has hired dozens of local officials to ensure that these voucher laws are quickly passed with few amendments. “We have incurred significant lobbying costs in several states,” K12 Inc. noted in a filing with the SEC.

Posted by Mike Klonsky at 5:35 AM No comments: Links to this post

Every day it's something.

Today there's two stories shining light on the Chicago way. The first is by Greg Hinz at Crain's. He writes about Rahm Emanuel's city council floor leader, Ald. Pat O'Connor and a woman who's "volunteered" to be the bookkeeper of his political campaign fund, even writing checks for him.


That would be Mary Ann Roti-Walz, the daughter of the late 1st Ward Ald. Fred Roti and — you knew this was coming — a $65,676-a-year aide to Mr. O'Connor's Committee on Workforce Development.

O'Connor is also Rahm's education guy in the council. I don't see any contradiction there. Do you?

As old man Daley used to say, when asked about giving his nephew the city's insurance business, "If a man can't reach out and help his own family, what kind of society are we living in?"


"This is how things work in Chicago. People in government jobs think you have to thank the boss by doing political work."

WHERE'S RAHM? ...The second is by S-T's Dan Mihalopolous, who lays bare the connection between younger, Richie Daley and the C3 boys down in Texas (all my vexes live in TX) who have made a killing here in Chicago with Lollapalooza. What's wrong with that, you ask? Nothing except for an obvious error of omission. While DM ties all the right threads together connecting Daley and his nephew Mark Vanecko to the Austin Lollapalooza cabal, there's not a mention of Rahm in the whole full-page story.

As I (here and here) and others have pointed out on several occasions, it's Rahm, much more than Daley, who is benefiting directly from the Lollapalooza deal. Remember Rahm's trip to SXSW last February? Believe me, he wasn't there two-steppin'.  He was stuffing his election war chest at an Austin fundraising party put on by a group of "heavy hitters" who do bazillions in business up in Chicago.

Who are the heavy hitters? None other than the 3 Charlies, two of whom, Charles Attal and Charlie Walker, were listed as hosts. Their concert promotions company has run Lollapalooza since 2005. They signed a contract with the Chicago Park District in 2012, during Emanuel's term, to continue operating it until at least 2021, giving them a 16-year, virtually un-taxed run. Who get's that?

C'mon Dan, get out of that office once in a while. I'm no fan of the Daley's as everyone knows. But Rahm's statute of limitations of blaming Daley for all his own failures, has run out.

Posted by Mike Klonsky at 2:47 PM No comments: Links to this post

The Mis-Education Campaign of the Climate Change Deniers 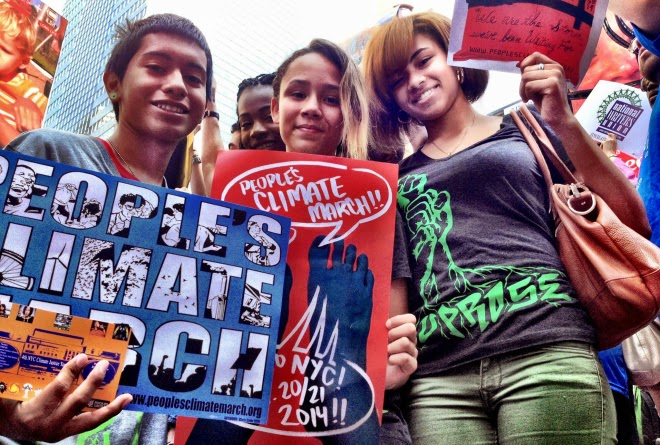 Today’s big People’s Climate Marches in New York City and 150 countries around the world, mark a new stage in the fight to save the planet from what Naomi Klein calls "the raw terror of ecocide." One of the greatest challenges faced by the movement is taking on and countering one of the greatest propaganda and mis-education campaigns in history, underwritten by the biggest and most reactionary corporate defenders of unregulated global expansion of capital. Since school curriculum and education profiteers play a major role in this campaign (see Bill Bigelow's excellent piece on Scholastic Magazine's prettification of the coal industry), a good part of the responsibility for taking on this challenge falls on us educators.


Slick public relations and advertising campaigns are underwritten to fool the public and smear the truthtellers. Foundations and think tanks have been created by industry just to create doubt and hammer away against the overwhelming evidence of climate disruption. Last year, the British newspaper The Guardian reported that between 2002 and 2010, via two right-wing groups, Donors Trust and Donors Capital Fund, billionaires had given nearly $120 million to more than 100 anti-climate change groups. And the progressive Center for Media and Democracy revealed that a web of right-wing think tanks called the State Policy Network, affiliated with the notorious American Legislative Exchange Council (ALEC) and funded to the tune of $83 million by companies including Facebook, AT&T and Microsoft, was pushing a had right agenda that includes opposition to climate change rules and regulations.

A new study from two groups, Forecast the Facts Action and the SumOfUs.org, says that since 2008, businesses have given campaign contributions to the 160 members of Congress who have rejected climate change that amount to more than $640 million. That includes Google, eBay, Ford and UPS; in fact, 90 percent of the cash came from outside the fossil fuel industry.

Klein's new book, This Changes Everything: Capitalism vs. The Climate, is a powerful antidote and provides educators with a great resource on the new environmentalism – one that focuses on systemic change rather than just go-green lifestyle choices.

According to Klein, climate change is not a problem that can be solved simply by markets or industry. Instead, it will require a massive reorganization of our political, economic, and social systems – one that, by both practical and moral necessity, must be driven by popular movements.

Posted by Mike Klonsky at 3:08 AM No comments: Links to this post


The $340 million privatization of the district’s custodial services has led to filthier buildings and fewer custodians, while forcing principals to take time away from instruction to make sure that their school is clean. That is the finding from a survey done by AAPPLE, the new activist arm of the Chicago Principals and Administrators Association.

The survey follows by a week, a report put together by AAPLE member Troy LaRaviere showing a list of the 45 lowest-performing (test-wise) schools saturated with privately-run charters while the list of top-performing schools has none. 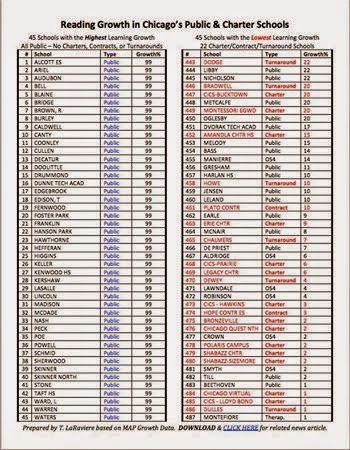 So the question continues to be asked, what is the source of this great love of privatization among school reform leaders and system bureaucrats? I think it's something in the drinking water at Harvard.

Posted by Mike Klonsky at 6:40 AM No comments: Links to this post