The Billionaire Boys Club is flexing its electoral political muscles again in Illinois. The Sun-Times reports that Citadel hedge-fund CEO Ken Griffin has kicked in a tidy $2.5 million to fellow billionaire Bruce Rauner's already bloated campaign fund. That includes $71,000 worth of in-kind contributions for the use of Griffin's private jet. It's reportedly the biggest single Illinois political donation ever — in the modern-day era — to a candidate for governor of Illinois. It's also the biggest ever from an individual other than the candidate himself  in the post-Watergate era when public disclosure records were first required, said one political scientist.

Griffin has also given more than $1 million to Karl Rove’s American Crossroads SuperPAC and has donated heavily to the Koch Brothers’ Americans for Prosperity. He's bigger than two-party politics and also gave heavily to both the Obama and Romney campaigns as well as to Chicago Mayor Rahm Emanuel's political war chest. Griffin and his wife, Anne Dias Griffin are both members of Rahm's kitchen cabinet as is Rauner himself.

Whether Rauner or Gov. Quinn prevails in November's election, Griffin's influence will be felt. The same is true for next year's mayor's race. And that doesn't bode well for teachers, unions, or the state's public school system. Griffin is one of the biggest corporate patrons of privately-run charter schools. He also helped underwrite Stand For Children's 2013 venture into Illinois and was heavily involved in their campaign to pass anti-teachers-union SB7 legislation.

Posted by Mike Klonsky at 4:24 AM No comments:


California court ruling is a setback for public education. When teachers lose so do kids. Don't blame tenure for the flaws of the system.

Judge Rolf M. Treu's ruling was based on the notion that teachers and students have conflicting interests, ie. what's good for teachers, like bargaining rights, is bad for kids. Treu even had the nerve to cite Brown v. Board as a rationale for his anti-teacher ruling.

The case was filed by a front group for the corporate "reformers" in an attempt to undercut statewide collective-bargaining agreements and to make it easier to fire teachers without due process. The legal costs were covered by  by Silicon Valley billionaire David Welch. Welch is also a founder of the New Schools Venture Fund, a powerful force behind the growth of privately-run charter schools.

...some of the most incendiary players in the national argument over the future of public schools, including Michelle Rhee, the former D.C. schools chancellor who got rid of tenure in the District in 2009 and went on to form an advocacy group aimed at eliminating it across the country. Parent Revolution, the group behind the controversial “parent trigger” laws, is another supporter.

On the teachers side were Gov. Jerry Brown, the CFT and the CTA. They will appeal the ruling.

James Ryan, dean of Harvard University's graduate school of education, said the verdict "will likely cause lawyers in other states to think about bringing similar suits." But he pointed out that the decision explicitly called on the state Legislature to fix the unconstitutional statues at issue. As a result, there will likely be "back-and-forth" between the Legislature and courts for many years to come.

"This has a long way before it's over in California and it hasn't even started yet in other states," Mr. Ryan said.
Posted by Mike Klonsky at 5:00 AM No comments: 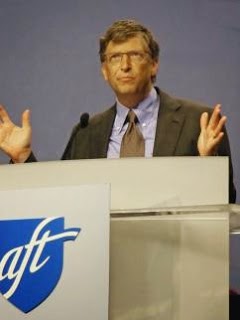 WaPo reporter Lyndsey Layton tells the story of how Bill Gates bought and paid for so-called school "reform".  He even got NEA and AFT leaders to buy-in to Common Core.

On a summer day in 2008, Gene Wilhoit, director of a national group of state school chiefs, and David Coleman, an emerging evangelist for the standards movement, spent hours in Bill Gates’s sleek headquarters near Seattle, trying to persuade him and his wife, Melinda, to turn their idea into reality...What followed was one of the swiftest and most remarkable shifts in education policy in U.S. history. The Bill and Melinda Gates Foundation didn’t just bankroll the development of what became known as the Common Core State Standards. With more than $200 million, the foundation also built political support across the country, persuading state governments to make systemic and costly changes.


“Really rich guys can come up with ideas that they think are great, but there is a danger that everyone will tell them they’re great, even if they’re not.”

Posted by Mike Klonsky at 9:53 PM No comments:


Everyone in Chicago knows that UNO is too big to jail. But that didn't stop the U.S. Securities and Exchange Commission (SEC) on Monday from filing a complaint against Juan Rangel's UNO cabal, charging the clout-heavy Chicago charter school operator defrauded investors in a $37.5 million bond offering by misleading them about conflicts of interest in giving construction contracts to companies run by relatives of an UNO official.

Only surprise here is that a charter school can even raise $37.5M from "investors." Really?

That's different, I suppose, from the $98M investment in UNO charters made by Gov. Quinn, using taxpayer money. UNO leaders can shrug off the likely SEC fine. It will amount to chump change for them. And with backers like Mayor Emanuel and Boss Madigan, you can bet no one's going to jail on this.

Posted by Mike Klonsky at 11:28 AM No comments: